Cheng Wanyun (程婉芸) used to go by the name Cheng Aihua (程爱华), and posts on Twitter as @paleylin (佩利) http://twitter.com/paleylin. At 5:30 pm on February 6, 2013 she posted the following on her Tencent Weibo (where she posts as "Dreams of Ensslin" - ensslin之梦 - http://t.qq.com/lishengnanshishi):


Just now my little brother's wife called, and the police suddenly came into the shop and took my brother and the shop's computer to the police station. Because the shop's computer sometimes uses the same Internet connection as my home, I don't know whether or not the police visit was the result of some information I posted. The current situation isn't clear, and my brother doesn't have a cell phone on him, so I'm rushing to the police station right now. Cell phone 13488860702.
刚才弟媳妇打电话过来，商店里的电脑突然被警察上门带我弟弟一起被带到了派出所。因家里与商店里有时使用同一条网线，不知是不是因为我所发布的信息导致警方上门。现情况不明，兄弟未带手机在身上，我马上赶去派出所一趟。手机：13488860702。

These screenshots show that this post was subsequently deleted. 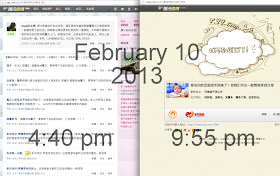 Cheng was not heard from again until February 11. These screenshots show that while she was detained Sina Weibo began censoring searches for "Peili" (佩利), "Cheng Wanyun" (程婉芸), and "Cheng Aihua" (程爱华). 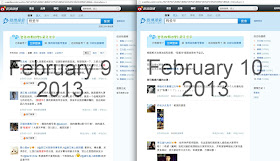 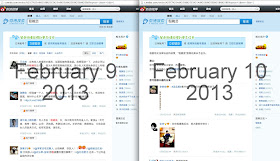 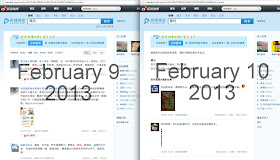 At 12:46 pm on February 11, Cheng posted the following to Tencent QQ under the name Li Sheng Nan (厉胜男):


Friends, I was subjected to criminal detention "on suspicion of the crime of inciting subversion of state power" for my online speech, which has since been changed tò 4 1/2 days administrative detention. I have just returned home after being released from the Xichong jail. No need for everyone to worry, and I wish everyone a Happy New Year, and thank all my Internet friends for their appeals and calls on my behalf. See you after I've had a chance to rest.
各位朋友，我因网络言论以 “涉嫌煽动颠覆国家政权罪”被刑事拘留，现改为抵行政拘留四天半，从西充看守所放出来刚到家。让大家担心了，祝大家新年快乐，感谢网友们的呼吁和声援。稍事休息后

Later that afternoon, Cheng posted the following on her Tencent Weibo:


4:11 pm: Ah, the Lords have lifted the ban. Happy New Year everyone, and thanks to all of you for your appeals and calls on my behalf.
4:11 pm: 哦，主号解禁了。大家新年快乐，感谢大家的呼吁与声援。


5:36 pm: || Mo Zhixu: It was because she posted the following in the comments in the Study Xi Jinping Fan Club: "Where's a sniper, get rid of him" that she was arrested, drop dead Eunuch Nie . . . || Zou Zhiwen: I heard she'd been released || Sage Nie: A person committed some offenses, and when the police came to detain her, she farted, so can you say that it was because she farted that she was detain? You know what I mean! But no one will be able to save her.
5:36 pm: || 莫之许: 是因为在学习粉丝团的后面说了句：＂狙击手在哪，干掉他＂，就被抓进去了，聂太监去死。。。|| 邹智文: 听说放出来了 || 聂圣哲: 一个人犯了几件事情，警察来抓她的时候，她放了一个屁，您能说是因为她放屁被抓吗？您懂的！但是，谁都救不了她。 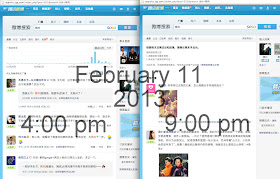 The screenshots below show that on February 16, Cheng's Tencent Weibo was deleted. This is her final post, from 9:29 pm the preceding day:


Public Security Office officials came to my home, so Liu Shasha, myself, and Hong Kong Diaoyu defense activist Captain Yang Kuang need to return to my home. They are talking about us going to Danaochuan Prison tomorrow. Actually, Liu Shasha just wanted to go and give a little money to Liu [Liu Xianbin - 刘贤斌] and Chen [Chen Wei -
陈卫], and try and get visitation rights for their wives. We're out now and can't return home, and my family is being harassed. Would everyone please help and post this on Twitter and Weibo. My home number is 0817-4224168, can everyone please call my home phone in support. Please also call the State Security phone.