Table tennis legend Deng Yaping will soon be adding to her rich experience by taking a further step in her political career. Deng, 37, the former world and Olympic table tennis champion, has been nominated to serve as president of Goso.cn, a news search engine launched by People's Daily in July, and as deputy secretary-general of People's Daily.

On February 16, 2013, the China-based website Huxiu.com (虎嗅网) published an article entitled "Homeward Bound Musings, Why is it Deng Yaping is Being Criticized" (回乡沿途八卦：话说邓亚萍为什么被批了). Some excerpts:


So far Jike has (supposedly) spent 2 billion, and has essentially no profits, [People's Daily deputy editor] Ma Li is unwilling, and has taken Deng to task, be diligent and thrifty,  stop all extravagance and waste, they are overstaffed, so a list needs to be made of 100 employees to be cut, and its said that it will be announced soon.
即刻到现在花了20亿（存疑），基本没有收益，领导马利不愿意了，把小邓教训了一段，要勤俭节约，不能铺张浪费，人浮于事，于是一张百人裁员名单出炉了，据说近期就将公布。 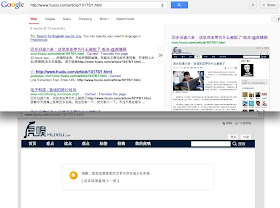 
Recently, online talk is that Deng Yaping has been criticized. Li Kaifu has raised the following four questions on his Sina Weibo with respect to "People's Search and Deng Yaping": 1) Why is taxpayer money being used to build a search engine? 2) Is there any hope of building a search engine where there is belief in the free flow of information? 3) Why is the boss of a search engine appointed by the Party? 4) If back in the day America's Democratic Party had appointed Michael Phelps to be the CEO of Google, could Google have beaten Yahoo and become the leading search engine?
近日，网传邓亚萍被批。李开复则在其个人新浪微博上，针对“人民搜索和邓亚萍”，提出了四大质疑：1)为什么要用纳税人的钱来做搜索引擎？2)做搜索引擎，却没有信息通畅开放的信念，可能有戏吗？3)一个搜索引擎公司的老总，为何由党来任命？4)如果当年美国民主党任命菲尔普斯出任谷歌CEO，谷歌能打败雅虎，成为搜索老大吗？

These screenshots show that within hours the article had been deleted. It had also been deleted from the following web sites where it had been reposted: 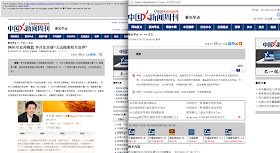 At 7:53 pm on February 17, Kai-fu Lee posted the following on Twitter:


I have been banned from speaking on Sina and Tencent for three days. Everyone can come here to find me.
我在新浪腾讯都被禁言三天，大家可以来这里找我。 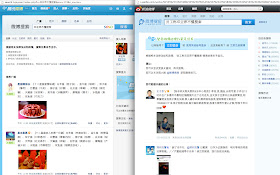 Late in the evening of February 17, the state-sponsored Global Times published an English language article entitled "Jike Shoots Down Layoff Rumor." Some excerpts:

Despite large investments in talent over the two years since its establishment in 2011, Jike's performance has still been unquestionably bad, mainly due to improper management and unattractive product positioning, Ji Chendong, an industry analyst with Frost & Sullivan, told the Global Times Sunday.
. . . .
A staff member from the Jike public relations department, speaking anonymously, told the Global Times that the company's current top priority is building up its technology, not gaining profits.
With the support of the government, it aims to release the latest food and drug safety information to the public, which will set them apart from rivals, she noted, adding that this goal is still some way off.
. . . .
Data from US research consultancy Hitwise indicated that Baidu Inc seized a 65.7 percent market share by traffic in December 2012, ranking first, while Qihoo 360 Technology Co's growing search engine came second with 8.7 percent. Jike and another State-owned search engine, Xinhua News Agency's panguso.com, did not make the list.

This screenshot, taken at around noon on February 18, shows that Sina Weibo did something to block all posts from between January 23 and February 17 from appearing in the results for a search for "Kai-fu Lee Banned." (李开复 被禁) 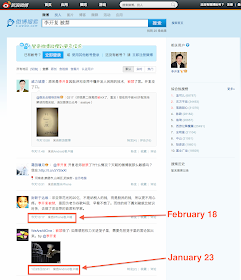 On the morning of February 18, Huxiu posted another article, this time entitled "Li Kaifu Gets Banned From Speaking, What Red Line Did He Step On?" (李开复遭禁言，踩到哪根红线？).  These screenshots show that it was deleted within hours. 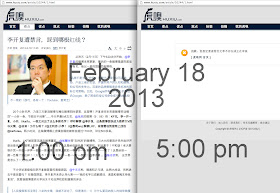 These screenshots was taken in the afternoon of February 18, and shows that Sina Weibo was censoring "Li Kaifu Banned from Speaking" (李开复 禁言).