According to internal communications from Baidu, an employee, surnamed Lu, was working with professional agents to delete posts. Lu was arrested on July 16 under suspicion of bribing non-government staff, the Beijing News reported.  Another two suspects, surnamed Sun and Xu, were detained on July 20 and 23. A non-Baidu employee was also detained, the report said.
. . . .
A member of staff from a post-deleting company named Beijing Haotian Lianmeng, said that it costs 1,000 yuan ($159) to delete an article from forums, 2,000 yuan to remove one from a blog and 3,000 yuan to delete a piece of news posted on a news portal, like Sina.
. . . .
Liu also claimed that he knew insiders in Internet companies, who could help him.

Betty Tian, a Baidu spokesperson, confirmed to the Wall Street Journal that the posts in question were on Baidu's Tieba forums. Hamish Mckenzie reported in a Pando Daily article entitled "Baidu’s Latest Scandal Shows Trust Is Still An Issue":


Baidu has in the past removed links to posts related to sensitive events, such as the melamine milk crisis. But those orders would likely have come from the government, so it wouldn’t be fair to blame the company for that. [Kaiser Kuo - Baidu's head of international public relations] told me: “[Baidu] would never remove links at the request of a third party unless that third party were a properly constituted governmental agency with regulatory control over such things.”

This screenshot, taken on August 6, shows that a search for "delete posts" (删帖) on Sina Weibo returns over three million results. The top result is a post by Caijing Magazine entitled "Three Baidu Employees Detained for Accepting Money to Delete Posts" (百度3员工收费删帖被刑拘). 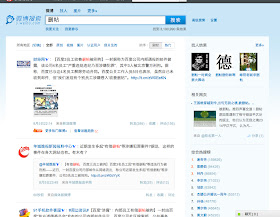 These screenshots, taken on August 7, show that a search for "delete posts" (删帖) on: 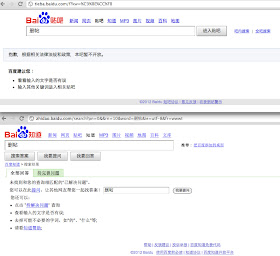 These screenshots show that the same search on Baidu web search restricted to Baidu's "Tieba" forums and Baidu's "Zhidao" (which is done by adding the "site:" operator - "site:tieba.baidu.com" and "site:zhidao.baidu.com") returns no results, just a notice saying "Search results may not comply with relevant laws, regulations, and policies, and have not been displayed." (搜索结果可能不符合相关法律法规和政策，未予显示。).

These screenshots show that the same searches on Sogou, one of Baidu's competitors, returns over 34,000 results for Zhidao and over 2 million results for Tieba. 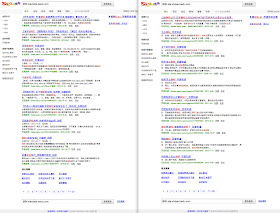 The top result on Sogou for "delete posts site:zhidao.baidu.com" is a post which has since been deleted which said in part: