The following is a summary of events and censorship relating to Gu Kailai and Zhang Xiaojun over the last several months.

November 13, 2011: Heywood flies from Beijing to Chongqing and checks into the Lucky Holiday hotel (南山丽景度假酒店).

November 15, 2011: Heywood is found dead in a Chongqing hotel room. Chinese authorities rule that the cause of death is alcohol poisoning, and his body is cremated.

These screenshots show several examples of how several websites in China began censoring information at that time.
April 10: Bo Xilai is suspended from his Politburo and top Communist Party posts. China announces Gu Kailai is being investigated for Heywood's death.

These screenshots show that at this point Baidu began restricting searches for "Gu Kailai" to its strict white list comprising its own Baike and about a dozen websites operated by the central government and the Communist Party. 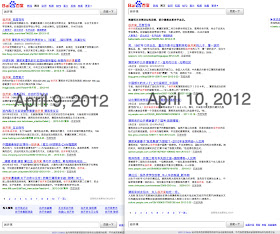 These screenshots show that a search on Sogou for "Bo Guagua," (薄瓜瓜) son of Bo Xilai and Gu Kailai, on the morning of April 11 returned almost a million search results. The same search conducted that afternoon returned only 11 results. 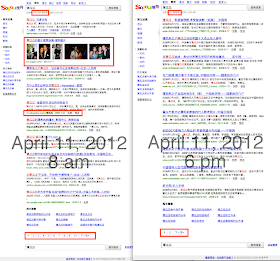 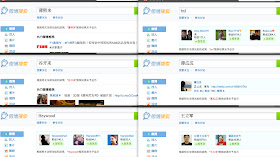 These screenshots show that the following day Sogou began censoring searches for "Zhang Xiaojun." On April 12, searches on Sogou returned over 180,000 results from websites including Hexun, Sohu, and QQ. By April 13, however, Sogou was returning around 2,000 results, all of them from about dozen websites controlled by the central government and the Communist Party. 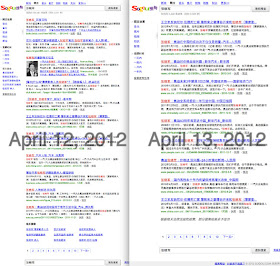 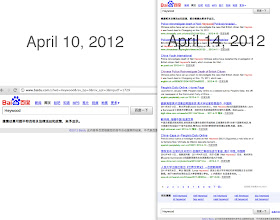 April 25: Bo Guagua writes an open letter to his school paper, the Harvard Crimson, saying his education has been funded by scholarships and his mother's earnings as a lawyer. He says he has no comment to make about the investigation.

May 17: the New York Times reports that Patrick Henri Devillers has been implicated in the business affairs of Gu Kailai.

This screenshot shows that a search for "Devillers" (多维尔) on Sina Weibo on May 17 returned no results, just a notice saying "In accordance with relevant laws, regulations, and policies, search results for "Devillers" have not been displayed." (根据相关法律法规和政策，“多维尔”搜索结果未予显示)

At some time between April 16 and May 17, Baidu relaxed its censorship of searches for "Bo Xilai." Prior to April 16, Bo Xilai's name had been on Baidu's strict white list. But some time after that Baidu moved his name to its broader white list, which is comprised of the strict white list websites, as well as large China-based news websites and portals.

Baidu did not, however, relax its censorship of searches for "Gu Kailai." These screenshots were taken at the same time on May 18, and show search results for "Bo Xilai" (薄熙来) and "Gu Kailai" (谷开来). Both display a censorship notice, but whereas searches for "Bo Xilai" return results from websites such as QQ, Sina, and Sohu, searches for "Gu Kailai" only return results from about a dozen websites, all of which (with the exception of Baidu's own Baike) are controlled by the central government and Communist Party, such as Xinhua. 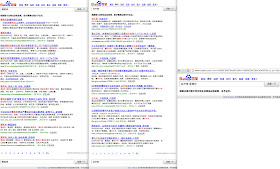 As a result of being placed on this stricter whitelist, a search for "Gu Kailai Devillers" (谷开来 多维尔) returns no results, just a notice saying "Search results may not comply with relevant laws, regulations, and policies, and have not been displayed." (搜索结果可能不符合相关法律法规和政策，未予显示。)

June 22: Cambodia’s Foreign Ministry said the country had no plans to extradite Patrick Devillers to China.

The screenshots, taken on June 22, show that, while a search for "Devillers" (多维尔) on Baidu returns (apparently) uncensored search results, searching for "Devillers extradition" (多维尔 引渡) results in a notice saying "In accordance with relevant laws, regulations, and policies, some search results have not been displayed" (根据相关法律法规和政策，部分搜索结果未予显示), and the results that Baidu has provided are restricted to about a dozen websites controlled by the central government and the Communist Party. 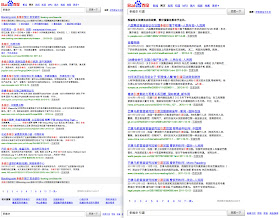 These screenshots, taken on July 7, 2012, show that for searches for Bo Xilai, Bo Guagua, and Gu Kailai, Baidu claims to have found 765k, 12k, and 8.4k results, respectively. In each case, however, Baidu only returns only one result - its own Baidu Baike article. 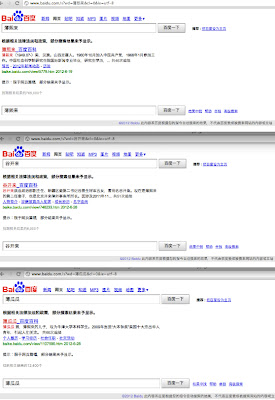 These screenshots were taken on July 15, and show that by now Baidu has reverted to its prior censorship of Bo Xilai, Gu Kailai, and Bo Guagua, with the former being on the broad white list and the latter two on the strict white list. 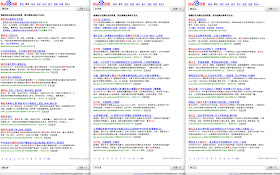 July 26: Gu Kailai and Zhang Xiaojun are charged with Heywood's murder by the People's Procuratorate in Hefei, Anhui province.

August 7: Bo Guagua sends an email to CNN saying: "As I was cited as a motivating factor for the crimes accused of my mother, I have already submitted my witness statement."

August 9: Gu Kailai and Zhang Xiaojun are tried in Heifei. Examples of Baidu's and Sina Weibo's censorship at that time can be found here.
August 20: At around 1:30 pm Xinhua reports that the Hefei court has issued its verdict. Shortly afterwards, Sina Weibo stops censoring "Gu Kailai." 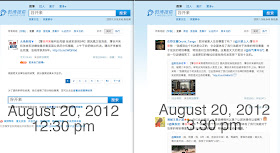