Ni Yulan has been awarded the Human Rights Defenders Tulip 2011 by the Dutch government after her actions against forced demolition in Beijing, becoming the latest recipient of a foreign human rights prize. An unverified report said that Wednesday, Ni's daughter Dong Xuan was not allowed to fly to the Netherlands to accept the award on behalf of her mother, who is still awaiting trial.
. . . .
But objectively speaking, it might be taking it too far to award Ni the Human Rights Defenders Tulip, which is for individuals who have done "exceptional human rights work." It is also unfair to generalize China's human rights development in this way.
In past decades, China has made significant progress in improving human rights.

On April 7, 2012, overseas media reported that Ni's daughter had been told that the verdict in her mother's case would be announced on April 10.

These screenshots show that a search for "Ni Yulan" on Sina's Weibo on April 7 returned over 16,000 results. The same search the following day returned a notice saying: "In accordance with relevant laws, regulations, and policies, search results for 'Ni Yulan' have not been displayed." (根据相关法律法规和政策，“倪玉兰”搜索结果未予显示).

These screenshots show that, immediately after the court's announcement a search for "Ni Yulan" on Tencent's Weibo was returning over 6,000 results. By noon, however, the same search only returned a notice saying "In accordance with relevant laws, regulations, and policies, search results have not been displayed." (根据相关法律法规和政策，搜索结果未予显示。)


I am very concerned by the sentencing of property and petitioner rights advocate Ni Yulan and her husband Dong Jiqin, as well as Ms. Ni’s health and well-being, particularly in light of past abuses she has suffered.


In response to questions from the press, Liu said in a statement that China was a country under the rule of law. No matter who violates the law, the person must be punished by law.
"The Chinese side is absolutely opposed to interference in its internal affairs and judicial sovereignty by any foreign countries under the pretext of so-called human rights concerns," Liu said.

On July 27, a Beijing appeals court overturned Ni's fraud conviction and reduced her sentence by two months, but upheld the conviction for creating a disturbance.

These screenshots show that, as of July 31, both Sina and Tencent were still censoring searches for "Ni Yulan" on their respective Weibo's. 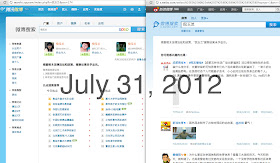