Hong Kong's education authority has come under criticism for organizing a tour of Mao Zedong's hometown of Shaoshan, Hunan Province, for the region's high school students with some commentators suggesting its part of a plan to indoctrinate local youth.
. . . .
The Hong Kong education authority was criticized for wasting public funds on "brainwashing national education activity," according to the Hong Kong-based Apple Daily.

On July 29, the state-sponsored People's Daily published an article entitled "Hong Kong Secretary of Education Responds to Suspicions Regarding National Education: If We Wanted to Brainwash It Would Be Very Difficult." (香港教育局长回应国民教育质疑:要洗脑很困难) 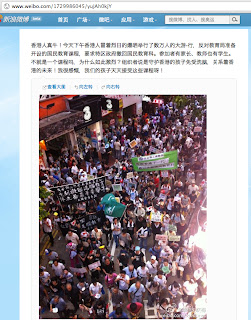 Also on July 29, 2012, a Sina Weibo user made the following post (which was subsequently deleted):


Those Hong Kongers are really too much! This afternoon Hong Kongers braved the heat and sun to gather by the tens of thousands for a march to oppose the national education program that the Education Bureau is preparing to launch. They called for the SAR government to revoke the national education classes. Participants included parents, teachers, and scholars. If its just a class, why are they so impassioned? An organizer said that it was to defend the children of Hong Kong from being brainwashed, and they were concerned for the future of Hong Kong! I am filled with a sense of gratitude that our children receive these courses every day!
香港人真牛！今天下午香港人冒着烈日的爆晒举行了数万人的大游-行，反对教育局准备开设的国民教育课程，要求特区政府撤回国民教育科。参加者有家长、教师也有学生。不就是一个课程吗，为什么如此激烈？组织者说是守护香港的孩子免受洗脑，关系着香港的未来！我很感慨，我们的孩子天天接受这些课程呀！

This screenshot, taken on July 29, 2012, shows that Sina Weibo was censoring searches for "Brainwash" (洗脑). 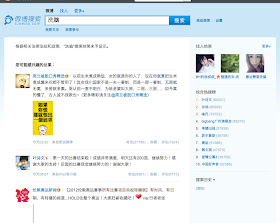 The following post, which says "Support the people of Hong Kong in opposition to national education" (支持香港人民反对国民教育) , was also deleted. 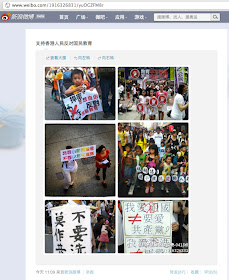 On August 2, 2012, the Global Times published an article entitled "No Reason for Hongkongers to Fear National Education Course" The report said:


Tens of thousands of Hongkongers took to the streets on Sunday to protest the introduction of a national education course that is set to begin in local primary schools this September.
. . . .
It has not been long since Hong Kong's return to China in 1997. It's necessary to have such classes. The initiator of the course is Hong Kong's education institution, not that of the mainland, and it is unlikely that the course will become the "political education lessons" that mainland students have.
. . . .
Setting up the national education course seems a process of the Chinese mainland influencing Hong Kong. But it is not an easy job judging from the current situation. The protestors defined the course as "brainwashing," which is an extreme way of putting things. Setting Hong Kong aside, it is even impossible to "brainwash" mainland people.

As of August 3, Sina Weibo was still censoring searches for "brainwash."