At least 35 people were killed and 166 others injured in an oil pipeline explosion in Qingdao, Shandong province, on Friday — one of the deadliest industrial accidents in China this year.
The leaking underground pipeline caught fire and exploded at about 10:30 am in the city's Huangdao district.
. . . .
President Xi Jinping and Premier Li Keqiang urged rescuers to make every effort to search for and save those injured or missing.
State Councilor Wang Yong arrived at the scene to guide the rescue work and comfort the injured. 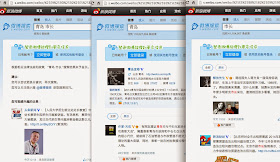 The screenshots below were taken on November 23, 2013, and show that Baidu was censoring searches for: Baidu was not censoring the names of any other provincial-level leaders. 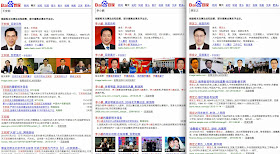 Sina Weibo was not censoring searches for any of these names.


China’s top decision makers have unveiled reform guidelines for the next decade. Four days of discussion by the Party’s 204-member Central Committee has yielded a statement.
It sets the tone for how the world’s second largest economy will deepen reforms in the new stage, after the transformation began more than three decades ago.
. . . .
Faced with a complicated global environment, and pressures for domestic reforms and a more efficient development path, the party’s political bureau has upheld the spirit of the 18th CPC National Congress, leading the Chinese people in successfully constructing a socialist economy. The bureau has also been striving to ensure that the Chinese people enjoy the fruits of development.
. . . .
A National Security Committee has been proposed to improve the national security system and strategy.

This screenshot was taken on November 15, and shows that Baidu had banned its users from establishing PostBar (Tieba 贴吧) forums on the topic of "National Security Council" (国家安全委员会).

As noted in a previous post, on November 13, 2013, the New York Times published an article entitled "JPMorgan’s Fruitful Ties to a Member of China’s Elite" (摩根大通与温家宝女儿曾有商业往来). Some excerpts:

To promote its standing in China, JPMorgan Chase turned to a seemingly obscure consulting firm run by a 32-year-old executive named Lily Chang.
. . . .
But what was known to JPMorgan executives in Hong Kong, and some executives at other major companies, was that “Lily Chang” was not her real name. It was an alias for Wen Ruchun, the only daughter of Wen Jiabao, who at the time was China’s prime minister, with oversight of the economy and its financial institutions.

The New York Times published the Chinese language version of its article on November 14.

These screenshots show that, while a search for the Chinese title on Baidu on November 17 returned censored results, the top results were from private China-based news web sites operated by companies such as Sohu, Phoenix, Netease, and Tencent.

The same search a day later only returned results from a white list of web sites operated by the central government and the Communist Party. 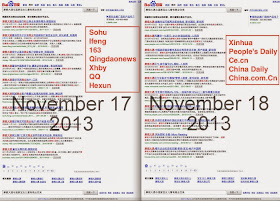 These screenshots were taken on November 18, and show that attempting to retrieve results for a search for the article's title from Sohu, Phoenix, and 163.com returns nothing except a censorship notice.

On November 13, 2013, the New York Times published an article entitled "JPMorgan’s Fruitful Ties to a Member of China’s Elite" (摩根大通与温家宝女儿曾有商业往来). Some excerpts:


To promote its standing in China, JPMorgan Chase turned to a seemingly obscure consulting firm run by a 32-year-old executive named Lily Chang.

Ms. Chang’s firm, which received a $75,000-a-month contract from JPMorgan, appeared to have only two employees. And on the surface, Ms. Chang lacked the influence and public name recognition needed to unlock business for the bank.

But what was known to JPMorgan executives in Hong Kong, and some executives at other major companies, was that “Lily Chang” was not her real name. It was an alias for Wen Ruchun, the only daughter of Wen Jiabao, who at the time was China’s prime minister, with oversight of the economy and its financial institutions. 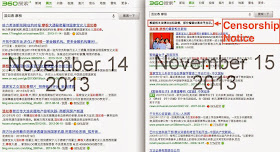 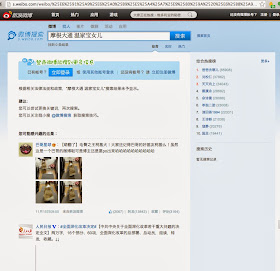 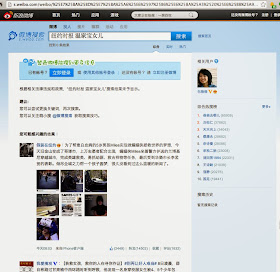 This screenshot shows Baidu had also banned users from setting up a forum to discuss Wen Ruchun on its PostBar (Tieba 贴吧) product. 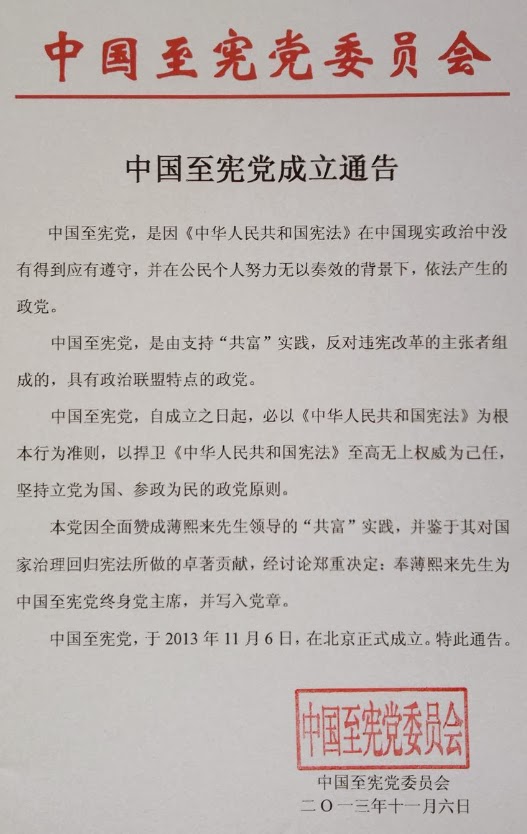 In early November, 2013, the image at right began to appear on the Internet. It shows a document using the letterhead of the "China Constitution First Party Committee" (中国至宪党委员会). The document, dated November 6, 2013, and entitled "Notice of the Establishment of the Zhi Xian Party" (中国至宪党成立通告) stated:


The Zhi Xian Party of China has come to be because the Constitution of the People's Republic of China has not been observed as it should by the government currently in power, and further because the individual efforts of China's citizens have been ineffectual.


Wang Zheng said in a phone interview that the Zhi Xian party was established last Wednesday in Beijing with the objective of bringing "common prosperity" – a fairer distribution of wealth – to China.

Wang, a Beijing-based lecturer, said she wrote letters to Bo about her plan to start the party – whose name roughly translates as "supreme authority of the constitution" – but named him chairman without his express consent.
. . . .
China allows a small number of officially recognised alternative parties, although they serve as advisers rather than competitors to the ruling Communist party. People have been jailed for setting up and participating in other political parties, mostly on charges of subverting state power.

These screenshots show that the day after the article appeared on the China Daily's web site, Baidu, Qihoo, Sina, and Tencent began censoring "Zhi Xian Party" and "Wang Zheng" (王铮).

On November 11, 2013, the state sponsored Global Times published an article entitled "Bloomberg Accused of 'Censoring Reports on China,' Analysts Say May be Fear of Offending China" (彭博社被指“审查对华报道”分析称或怕得罪中国). Some excerpts:

On November 8 the American New York Times published a report accusing another American news outlet - Bloomberg - of "censoring reports critical of China." The article cited statements from an unnamed employee of Bloomberg in Hong Kong as saying that at the end of last month during a phone conference an article written by him regarding the issue of private-public interests in China was ordered not to be published by Bloomberg editor Winkler. Winkler said that 'If we run the story, we’ll be kicked out of China."
美国《纽约时报》8日刊登文章，指责美国另一家媒体彭博社“审查批评中国的报道”。文章引用匿名彭博社驻香港工作人员的话称，在上月底的一次电话会议上，其撰写的关于中国官商利益问题的报道被彭博社主编温克勒下令禁止发表，“温克勒说，‘如果发表这篇文章，我们将被踢出中国’”。

This video shows that the Global Times story - originally available here http://world.huanqiu.com/exclusive/2013-11/4549358.html -  was deleted within hours of publication.

The article can still be found on several other web sites:

UPDATE NOVEMBER 13, 2013: The story has now been deleted from all of the aforementioned pages. These screenshots show the before-and-after for Xinhua and Sina.

These screenshots were taken on November 11, and show that searches for "Bloomberg" (彭博社) on two of China's largest search engines and two of its largest Weibos were being censored. 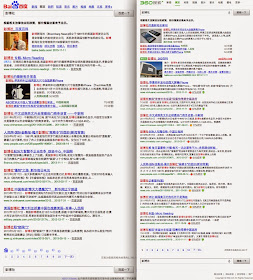 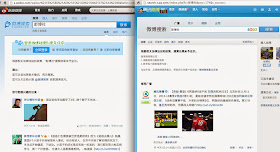 
The New York Times article, entitled "Bloomberg News Is Said to Curb Articles That Might Anger China," can be found here - http://www.nytimes.com/2013/11/09/world/asia/bloomberg-news-is-said-to-curb-articles-that-might-anger-china.html.
Share

On Eve of Third Plenum, Baidu Blocking Users From Setting Up Forum on "Third Plenum"

On November 8, 2013, the state sponsored Global Times published an article entitled "Only 33% Want Political Reform at Party Plenum." Some excerpts:


A Global Times poll has found that respondents from seven major cities regard the social welfare and social security systems as the most anticipated areas for reform at the upcoming plenum of the Communist Party of China (CPC) Central Committee.
. . . .
The result of the poll came before the opening of the Third Plenary Session of the 18th CPC Central Committee on Saturday. The four-day plenum is expected to roll out a package of reform plans, with top leaders repeatedly vowing to comprehensively deepen reforms.
According to the poll, more than 63 percent of the respondents said they will pay close attention to the plenary session, while some 36 percent said they will pay no attention.

This screenshot was taken on November 8, and shows that Baidu has banned users from setting up a PostBar (Tieba 贴吧) forum to discuss the "Third Plenum" (三中全会).

These screenshots, taken at the same time, show Sina and Tencent Weibo were not censoring searches for that term. 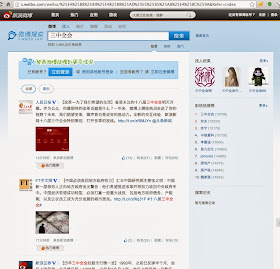 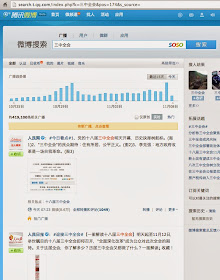 
Meng Jianzhu, Chief of Political and Legal Affairs Commission, CPC, said, "The violent terrorist incident that happened in Beijing was an organised and planned act. It was instigated by the terrorist group, the East Turkestan Islamic Movement which is entrenched in central and west Asian regions."

These screenshots were taken the same day, and show that a search for "East Turkestan Islamic Movement" (东伊运) on: 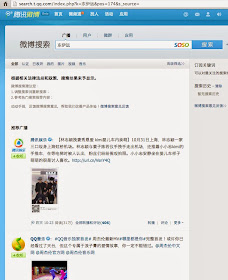 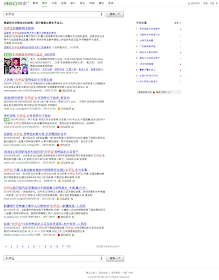 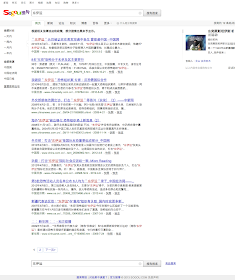 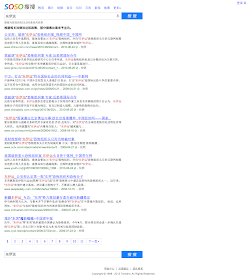 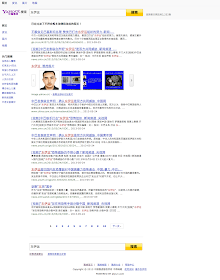 Baidu web search and Sina Weibo did not appear to be censoring searches for that term.
Share

On the evening of October 30, 2013, the Communist Party mouthpiece the People's Daily published an article entitled "Five Detained Over Tian'anman Terrorist Attack." Some excerpts:


Chinese police have identified Monday's deadly crash at downtown Beijing's Tian'anmen Square as a terrorist attack and five suspects have been detained.
The attack was "carefully planned, organized and premeditated," police said.
With the cooperation of police authorities including those in northwest China's Xinjiang Uygur Autonomous Region, Beijing police have captured five suspects who had been at large, a spokesman with the Beijing Municipal Public Security Bureau said on Wednesday.
Usmen Hasan, his mother, Kuwanhan Reyim, and his wife, Gulkiz Gini, drove a jeep with a Xinjiang plate to crash into a crowd of people at noon on Monday, killing two people and injuring another 40, the spokesman said. 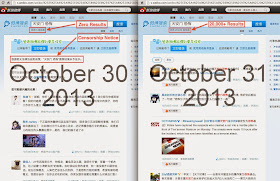 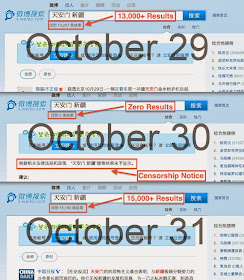 As this screenshot, taken on November 1, shows, Baidu continues to censor searches for "Tiananmen Terror." 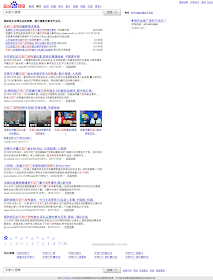