The Chinese government on Thursday published its third national action plan on human rights protection, addressing challenges and promising to improve people's standard of living and quality of life.

From the section of the Action Plan entitled “Rights of Expression and Supervision”:


Services shall be further improved for netizens to express their opinions, and great store shall be set on social sentiments and public opinions as expressed on the Internet.

These screenshots were taken on September 30, 2016, and show that Baidu continues to ban users from establishing PostBar (Tieba 贴吧) forums on the topic of “Human Rights” (人权)， “freedom” （自由), and “speech” (言论). 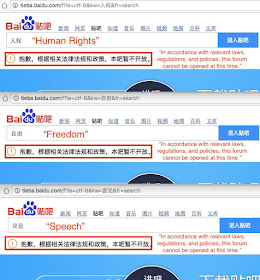