China's military authorities on Wednesday pledged to continue addressing the difficulties facing some military veterans, after over 1,000 of them gathered outside a military building to protest their dismissal.

China's Ministry of National Defense confirmed the gathering with the Global Times in a statement sent by its Information Bureau on Wednesday, saying that in recent years some veterans have been facing personal and employment problems, and that they have appealed with letters and calls.

The statement said that the Communist Party of China, the State Council--China's Cabinet--and the Central Military Commission care about veterans and pay high attention to solving their problems.

More than 1,000 protesters marched and chanted in front of China's defense ministry Tuesday, the latest apparent demonstration by soldiers as the world's largest standing military modernizes and downsizes. Two demonstrators told Associated Press that they were veterans who wanted the government to address military pensions.

"They protested because they don't have a job after serving a long period of time in the army, some for a dozen years," Liu Feiyue, editor of the website Minsheng Guancha, which monitors civil rights issues, was quoted as saying in the report.

The Chinese language version was entitled “Retired Soldiers’ Rights Defense Issues Should Be Objectively Assessed” (退伍军人维权问题应得到客观评估).  Besides the differing titles, other differences between the English and Chinese versions included:
These screenshots show that Sina Weibo began censoring searches for “Retired Soldiers Petition” (退伍军人上访) on October 12. 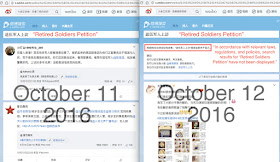 These screenshots show that on October 13 Baidu deleted a question from its Knowledge (Zhidao 知道) platform. 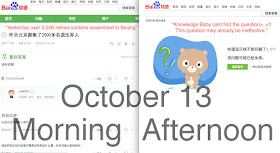 The answers were:
Original URL: http://zhidao.baidu.com/link?url=kqehCnXAHS_R3Difdoxiia_ymCB1i0neJvwoC-Wij-2WvnajK6QY4yf4zpkxjn7W4V-s0T4VxpQNMvQ9YvuxnarV26Y8KWpB6BgEWAepS7W

These screenshots were taken on October 13, and show that Baidu had banned users from establishing PostBar (贴吧 Tieba) forums on the subjects of “Retirees” (退伍) and “Soldiers” (军人). 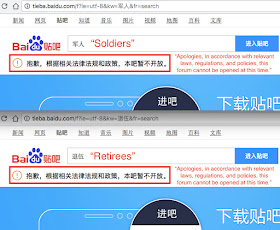