Police in Wuhan, capital of Central China's Hubei Province said Sunday they have detained a man for uploading a video claiming that lay-offs from the local steel giant had sparked a protest.

A viral video, uploaded by the man surnamed Rong, showed hundreds of people gathered in a street with a subtitle saying employees from Wuhan Iron and Steel (Group) Corporation (WISC) held a "procession," Changjiang Daily reported.

Police said they detained Rong for five days, and they've concluded that his subtitle was misleading, local police said on its Sina Weibo account on Sunday.

These screenshots show that on the same day the Global Times published the article, Baidu was censoring posts on its PostBar (Tieba 贴吧) and Knowledge (Zhidao 知道) forums. 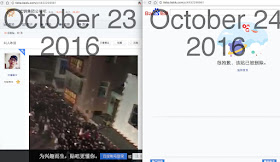 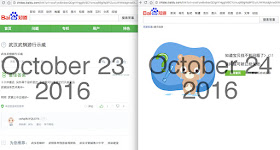 These screenshots show that on October 23, three of the top Baidu search results for “Wugang Demonstrations” (武钢 示威) were posts on Baidu Knowledge about Wugang protests. The following day all of the Baidu Knowledge posts have disappeared. However, the top result is a post on a forum on the China.com website entitled “Wugang Workers March Demonstrate Protest Company Low Price Buyouts Layoffs” (武钢工人游行示威抗议公司低价买断下岗). 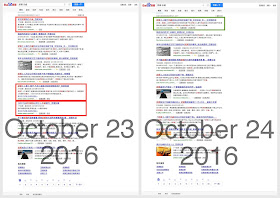 Below is a screenshot showing the China.com post, which was still available as of October 30. 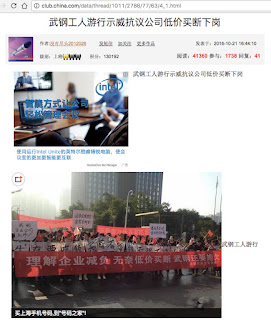