The Sixth Plenary Session of the 18th CPC Central Committee concluded on Thursday. For the first time "the CPC Central Committee with Comrade Xi Jinping as the core" was written into the communiqué. "Xi as the core" in fact has long been in the minds of the Chinese people and among public opinion.
. . . .
All Chinese know clearly that the Xi's leadership has played a critical role in the changes in China in the past four years and the significance of the word "core" being written into the Party document. The sixth plenum is themed on strict Party governance. This is what the Chinese people are willing to see.

These screenshots were taken on October 27, 2016, and show that users who searched for the single character “Xi“ (习 - Xi Jinping’s surname) on Baidu’s PostBar (Tieba 贴吧) forum are told “Apologies, in accordance with relevant laws, regulations, and policies, this forum cannot be opened at this time” (抱歉，根据相关法律法规和政策，本吧暂不开放). The same search on Baidu’s Knowledge (Zhidao 知道) forum and Wenku (文库) file sharing service yields no results. 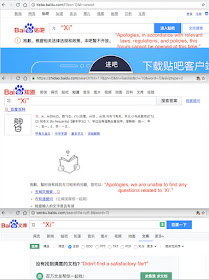