As previously noted on this blog, on October 19, 2016, China's Supreme People's Court published a piece on its website entitled "People's Courts Come to the Defense of the 'Five Heroes of Wolf Tooth Mountain' and Other Model Cases Involving the Right of Human Dignity of Heroic Figures" (人民法院依法保护“狼牙山五壮士”等英雄人物人格权益典型案例).  That article explained why People’s Courts in Beijing had been correct in holding Hong Zhenkuai liable for defaming two dead soldiers. The defamation took place in two articles written by Hong and published in 2013 on the Caijing website and in the Yanhuang Chunqiu magazine. For more on this, see Supreme People's Court Website Explains Why Courts Found Author Guilty of Defaming Dead Heroes.

Those two articles questioned the official version of events that took place during World War II, which are summarized on the website of China’s State Council Information Office as follows:


In 1941, during the Sino-Japanese war, a group of five Communist soldiers were able to deceive the advancing Japanese army and drew them up to the slopes of Langya Mountain. The Japanese, thinking they were besieging the main army, lost valuable time and troops trying to eliminate them. When the five heroes ran out of bullets, they jumped off the cliffs. Three of them died but two could hang by a tree branch, survived and could recount the story. In the mean time, the Chinese main force could escape and regroup. 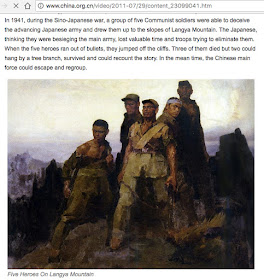 Hong’s impetus for writing those two articles appears to have been the detention of Zhang Guanghong (张广红) for posting the following on his Sina Weibo on August 27, 2013:


Teacher Yuan Tengfei was filming the movie of the screenplay "Five Heroes of Wolf Tooth Mountain, and when Mr. Geng went to the location to understand the situation, the locals said: These five were just a few straggling soldiers of the Eighth Road Army, and after they got here they wanted to eat and drink, and if you showed any reluctance they beat you. Because a few of them held guns, the locals didn't dare give offense. Afterwards some people came up with an idea, and secretly to the Japanese of their whereabouts. The Japanese then came along and surrounded them, and the locals intentionally steered the five to flee down a dead end path."

The day after Zhang posted this, the Guangzhou Public Security Bureau Yuexiu District Division detained him, and on August 30, 2013, it issued an order that Zhang would be subjected to seven days of administrative detention in accordance with the provisions of Articles 25(1) of the "Public Security Administrative Punishments Law of the People's Republic of China." That article provides:


Anyone who commits any of the following acts shall be detained for not less than 5 days but not more than 10 days, and may be concurrently fined 500 yuan. If the circumstances are relatively minor, they shall be detained 5 days or less or be fined not more than 500 yuan: 1. Intentionally disturbing public order by spreading any rumor, giving false information about the situation of any risk, epidemic disease or emergency, or by any other means . . . .

At the time of his detention, several state sponsored media outlets reported on the matter. For example, on August 31, 2013, the state sponsored Southern Metropolitan Daily published an article in its print edition entitled “Yue Police: Internet User Detained for Defaming the Heroes of Wolf Tooth Mountain” (穗警方：网民污蔑狼牙山五壮士被拘). Some excerpts:


A search by a Southern Metro reporter indicated that this was not the first time this information had appeared online. As early as 2007, Internet users had already posted this information on Baidu’s PostBar forum, and this kind of information was posted many times thereafter, but the posters’ identities could not be confirmed.

Similarly, on September 1, 2013, the state sponsored Beijing Youth Daily publishes an article in its print edition entitled “An Internet User in Guangzhou is Detained for Spreading Rumors About the “Five Heroes” (广州一网民涉嫌散布“五壮士”谣言被拘留). Some excerpts:


In March 1996, a news report entitled "Five Great Men, One Insignificant One - There Were Six Men at Wolf Tooth Mountain" caused a momentary stir, with the article outlining that there were six people doing battle on Wolf Tooth Mountain that year, with five jumping and one surrendering and being killed. The report was republished by quite a few newspapers and magazines.
On July 18, 2007, an Internet user posted an article on Baidu's PostBar forum entitled "The Truth About the Five Heroes of Wolf Tooth Mountain Who Plummeted to Death in Their Prime." Quite a few Internet users followed and responded trying to further understand this heretofore unknown "story."
On December 14, 2011, the author of a post on Baidu's PostBar forum entitled "Here is the Real Truth About the Five Heroes of Wolf Tooth Mountain!" wrote that "In 1985 I once followed a work team though the mountainous areas of Wolf Tooth Mountain in Guantou Village in Yi County for half a year doing a survey of the situation in the countryside. I was fortunate to hear an old man offer a different description of the story of the Five Heroes."

Zhang filled an appeal with the Guangzhou Intermediate People's Court asserting the lower court committed errors of fact and law.

Errors of Fact:
Errors of Law:

Article 25 of the "Public Security Administrative Punishments Law” requires intent, and therefore the Public Security Bureau had the burden to demonstrate:
On May 20, 2015, the Intermediate People’s Court rejected Zhang’s appeal saying:


The Appellee [Public Security Bureau] believed that the Appellant [Zhang] used the Internet to publish false stories about the "Five Heroes of Wolf Tooth Mountain" to distort the image of revolutionary martyrs, thereby causing harmful effects online, and that this constituted the act of spreading rumors and disturbing public order, and therefore imposing punishment in this case accorded with the aforementioned provisions.