According to the China.org.cn website (which is operated under the auspices of China’s State Council Information Office):


In March 1951 [Qiu Shaoyun] (邱少云) joined the Chinese People's Volunteers Army to fight against U.S. in Korea. Part of a squad sent to ambush enemy forces near Kimhwa, on October 11, 1952, Qiu Shaoyun edged close to the enemy defenses using grass and twigs as camouflage. At noon the enemy threw a fire bomb that set fire to the grass near Qiu's position. Realizing that any sound or movement would give away the position of his comrades, Qiu endured the agonizing pain in silence and was burnt to death.

Thanks to his sacrifice, his squad won the ensuing battle.


On March 13, 1988, a major forest fire broke out in Shimian County and [Lai Ning] (赖宁) and his classmates went to help with the fire-fighting efforts. The students were passing a still-smoldering area of forest on the way home that evening when a gust of wind rekindled the flames. Lai, who was at the back of the group was caught in the blaze and died. 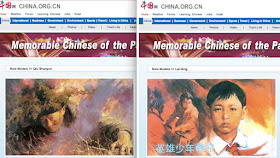 
Because Qiu Shaoyun lay on a bonfire without moving, in the end the restaurant customers refused to pay the bill for something only cooked on one side. They all said that Lai Ning's barbecue was better.
由于邱少云趴在火堆里一动不动最终食客们拒绝为半面熟买单，他们纷纷表示还是赖宁的烤肉较好

Sun was well known blogger on Sina Weibo (known in Chinese parlance as a “Big V,” and at the time of the post he had over 6,030,000 followers. Before being deleted the following day, Sun’s post was reposted 662 times, liked 78 times, and commented on 884 times.

In April, 2015, beverage maker Jia Duo Bao (加多宝) was holding an "appreciation" event at its "Jia Duo Bao Cold Tea 2014 Sales Team Awards" it posted over 300 "Thank You" posters on the "Jia Duo Bao Campaign" weibo, thanking others including the news media, commercial partners, consumers, and certain famous figures, including Sun. Jia Duo Bao’s “Thank You” to Sun was posted on April 16 and read as follows:


Many thanks @ExerciseBook, congratulations on the popularity of your barbecue. As makers of cold tea, we support you becoming the CEO of a barbecue stand, 100,000 bottles to open shop, walk the talk ^_^#ManyThanksCampaign#.
多谢@作业本，恭喜你与烧烤齐名。作为凉茶，我们力挺你成为烧烤摊CEO，开店十万罐，说到做到^_^#多谢行动#

That same day Sun posted a public response on his "Exercise Book" account:


Many thanks for the 100,000 bottles, I will certainly open the barbecue shop, only I haven't fixed which day. But regardless, everyone who leaves a message here will get a free drink when they enter the store!!!
多谢你这十万罐，我一定会开烧烤店，只是没定哪天，反正在此留言者，进店就是免费喝！！！

In June 2015, Qiu Shaoyun’s brother Qiu Shaohua (邱少华) filed separate lawsuits against Sun and Jia Duo Bao in the Beijing Daxing District People's Court claiming that Sun’s post insulted and defamed Qiu Shaoyun, and that Jia Duo Bao “violated social ethics in debasing the image of martyr by in a vulgar marketing campaign, thereby having an extremely malicious impact on society.” He asked that the two defendants be ordered to immediately cease and desist, eliminate all impact, formally apologize, and pay 1 yuan in mental suffering.

On October 19, 2016, China's Supreme People's Court published a piece on its website entitled "People's Courts Come to the Defense of the 'Five Heroes of Wolf Tooth Mountain' and Other Model Cases Involving the Right of Human Dignity of Heroic Figures" (人民法院依法保护“狼牙山五壮士”等英雄人物人格权益典型案例). The Supreme People’s Court summarized the outcome of the lawsuits as follows:

Jia Duo Bao’s statements issue in this case were objectively made in relation to the infringing statements made by Sun Jie and were spread rapidly, causing a relatively significant negative impact. Subjectively, Jia Duo Bao had a duty of care to be cautious in planning their commercial campaign, and should have, but failed to, screened out Sun Jie's somewhat influential and inappropriate statements. In this they were at fault and therefore should bear responsibility in tort.

The Supreme People’s Court website went on to explain why this was a “Model Case”:


This is a model case of malicious defamation and insult of a national hero and revolutionary martyr and harming their interests in personal dignity. What makes this case special is that first a famous Internet user maliciously insulted and defamed a national hero, and then a commercial company made use of the unlawful statements to maliciously drive up the efficacy of a commercial promotion. The combination of these two actions formed a single damaging outcome.

The judgment in this case is worthy of praise in the following ways:

First, in its analysis of the infringing statements, it linked the context in which they were made to the publication and public reaction to them, and recognized that the infringing parties were objectively malicious and the harmful consequences.

Second, in grasping collective infringement of multiple parties, it focused its analysis on the connections between the multiple statements and their interaction, correctly grasping the commonality between the subjective relationship among the parties and the harmful consequences.

Third, in terms of the nature of the liability, it recognized the joint liability between multiple infringing parties.

Fourth, in terms of the form of the liability, based on the fact that the infringing parties had  deleted the infringing statements, it held they bore a responsibility to formally apologize and provide compensation for emotional suffering, and this form of liability was appropriate.