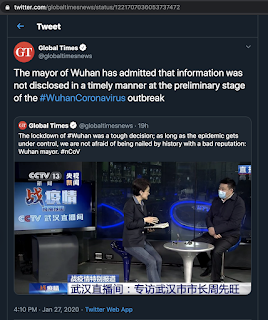 The following are posts from this blog covering censorship in the PRC relating to the Covid-19 pandemic.

April 24: Censorship of the "Voices of April"

On April 22, 2022, a video began circulating on the Internet titled "Sounds of April" (四月之声, or "Voices of April"). What's On Weibo described it as "a compilation of real audio snippets from conversations recorded in Shanghai throughout April, providing an emotional and heart-wrenching account of what residents in Shanghai have gone through since the Covid crisis started in their city." The PRC government censored it. You can also read how one PRC propagandist defended that censorship here: Hu Xijin: Censored Speech in China is Better than Free Speech in the West.

Zhong Nanshan (钟南山) is, according to the state-sponsored media outlet Global Times, "China's top respiratory disease expert." In an editorial titled "Strategies for reopening in the forthcoming Covid-19 era in China" published in the English-language National Science Review journal on April 6 Zhong wrote "Prolonged dynamic zeroing cannot be pursued in the long run." A Chinese translation of the article was censored on mainland news sites.

On April 2, 2022, a news editor at the state-sponsored media outlet "Sixth Tone" posted on Twitter that one of their reports titled "Orderlies at Shanghai Nursing Home Describe Chaos Amid Outbreak" regarding the COVID situation at Shanghai's Donghai Elderly Care Hospital had been "disappeared." The same day, observers noted that another story about the COVID situation in a Shanghai elder care center had also been deleted, this time it was an article from the state sponsored media outlet Caixin (财新网) titled "COVID-19 Hits Donghai Nursing Home" (新冠侵袭东海养老院).

February 23: Censorship of News Reports Critical of the Government's Response

Examples of over 20 news articles that were censored from January to April 2020, with examples from three articles published by China's more reputable state sponsored media outlets described in detail.

February 17: People Silenced and Punished by the Chinese Government 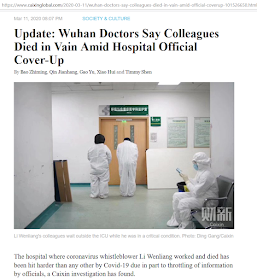