On the evening of January 27, Zhu Ruifeng published a Weibo saying that the police had come to his house to find him, "I'm certain its the Chongqing police," garnering the attention of Internet users. This reporter interviewed the investigator responsible for the Xiao Ye extortion ring case.
. . . .
Question: Why were you looking for Zhu Ruifeng?
Answer: In the course of investigating the case of Xiao Ye extortion ring's use of salacious inducements, secretly making vulgar video recordings, and committing extortion, investigators discovered that the vulgar video of Lei Zhengfu that Zhu Ruifeng had exposed had been provided by the criminal ring's member Xu Sheqing (already arrested). Based on information provide by Xu Sheqing, because of internal discord with Xiao Ye, in early November 2012, in order to exact revenge, he came to Beijing with a neighbor of Zhu Ruifeng's surnamed Wang, and provided vulgar video that was used for extortion to Zhu Ruifeng. In order to thoroughly investigate the circumstances of the Xiao ye extortion criminal ring, and coordinate with the needs of anti-corruption work, the investigation team, in cooperation with Beijing police, sought out Zhu Ruifang in order to verify the circumstances and obtain related evidence.
朱瑞峰发布微博称，有警察去家里找他，“肯定是重庆警方的”，引发网民关注。记者为此采访了侦办肖烨敲诈勒索犯罪团伙专案组负责人。
. . . .
问：为什么找朱瑞峰？
答：专案组在侦办肖烨犯罪团伙利用色情勾引、密拍不雅视频、实施敲诈勒索一案过程中，发现朱瑞峰曝光的雷政富不雅视频系该犯罪团伙成员许社卿（已逮捕）向其提供。据许社卿交待，因与肖烨分赃不均发生内讧，为达到报复肖的目的，许于2012年11月初，与朱瑞峰熟识的老乡王某一道赶到北京，将实施敲诈勒索的不雅视频当面提供给朱瑞峰。为彻底查清肖烨犯罪团伙敲诈勒索的案情，配合反腐败工作的需要，专案组在北京警方的协助下，依法找朱瑞峰核实了解相关情况并提取相关证据。

This screenshot, taken on January 28, shows that a search for "Zhu Ruifeng" on Sina Weibo returned no results, just a censorship notice. 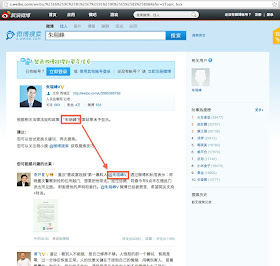 However, when Sina censors searches like this its standard practice is to include recent popular posts that are unrelated to the search terms in question, often from popular Weibo users such as Kai-fu Lee (who has over 27 million followers).  In this case this policy seems to have backfired, as the arrow in the screenshot above indicates that Lee's most recent post was in fact about Zhu Ruifeng. It read:


Zhu Ruifeng, the first person to expose the Chongqing "Lei Zhengfu Video," used his Weibo and private messaging to say: yesterday evening Chongqing police came knock at his home, and wanted to take him away. After negotiations, he agreed to go to meet them at the Desheng Police Station at 9:00 am. The attached image is his Announcement and Entrustment. Zhu Ruifeng's verified Weibo has already been silenced, I hope Internet users will support and repost.
重庆“雷政富视频”第一爆料人 @朱瑞峰V，通过微博和私信表示：昨晚重庆警察到他的住所敲门，想要把他带走。经过协商，同意今早9点半在德胜门派出所见面。 附图是他的声明和委托。@朱瑞峰V 微博已经被禁言，希望网友支持+转发。

Here is the text from the image attached to Lee's Weibo post.

This is not the first time we have seen this kind of "fail" - we saw something similar during the Southern Weekend New Year's Greeting controversy earlier this month: http://blog.feichangdao.com/2013/01/sina-weibo-features-southern-people.html.
Share
‹
›
Home
View web version