On February 6, 2015, the print editions of the People's Daily, Guangming Daily, and the China Education Daily, as well as the Xinhua website published editorials on the topic of ideological indoctrination at China's institutions of higher learning. Some themes that were repeated in more than one editorial:
People's Daily, Page Six: "Ensure Marxism Plays Leading Role in Universities' Ideological Arenas" (坚持马克思主义在高校意识形态领域的指导地位). 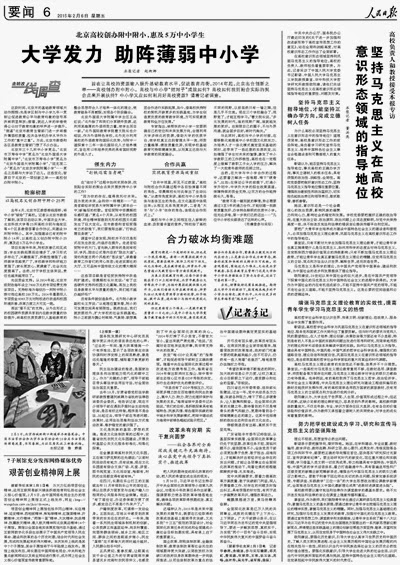 Jin Nuo [Party Central Committee Secretary at China People's University] said that university liberal arts departments have made important contributions to cementing the leadership role of Marxism in universities' ideological arena. But they have not lived up to the demands of the times and the hopes of the Party and the people when it comes to training personnel, thought leadership, and policy consulting. In particular, some people fail to take Chinese practices and Chinese issues as the starting point for thought and research, and simply use Western theoretical and academic discourse systems to analyze Chinese practices.

Guangming Daily, Page Four: Teachers Are the Foundation of Ideology Battlefield Construction at Our Institutions of Higher Learning (高校意识形态阵地建设根本在于教师). 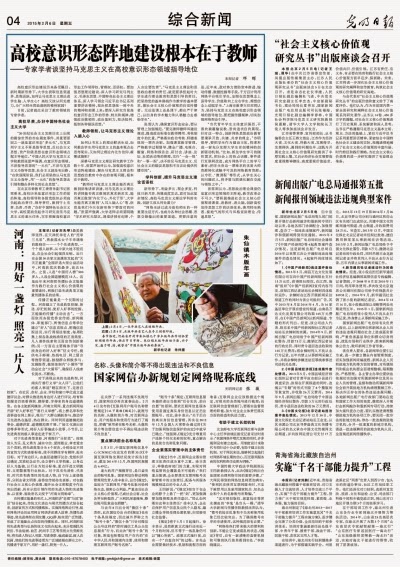 Zhang Leisheng, a professor at the Marxism Institute at China People's University, stressed that, when comes to ideological issues, if we do not speak in terms of a "singular" guiding ideology, if we do not speak in terms of Marxism being our guiding ideology, then there is no hope for socialism. "At China's current stage, we must insist upon having Marxism as our guide, and employ a "singular" guiding ideology to steer and create conformity amongst diverse social ideologies."
. . . .
Zhang Leisheng also stressed that university instructors must be clear: "there are no areas of academic research that are out-of-bounds, but classroom lectures must observe discipline, and everyone will be held responsible for the words they speak. . . . Being responsible for Marxist theory and political ideology education means living up to the responsibility to provide college students with instruction in theory and guidance in thought, insisting upon making the Party's basic line the inherent basis for all instruction, and taking the initiative to become a proselytizer of core socialist values. Whether inside or outside the classroom, you must be strict with yourself, and use your academic charm and personal charisma to infect your students."
. . . .
"Increase control over classroom instruction, strictly direct and supervise the teaching process, implement comprehensive controls over radio, television, billboards, the Internet, public lectures, research seminars, lectures, forums, and the activities of organizations. Establish systems so that every meeting and event gets reported, and under no circumstances provide any room for the dissemination of any erroneous ideas or inappropriate speech that is anti-Marxist or anti-socialist."
. . . .
Online life has already become an important way of life for university teachers, a well as becoming a major channel for the expression of social trends and the exchange of ideas. What we must pay more attention to, however, is that in recent years enemy forces have employed every means at their disposal, including capital infiltration, inciting propaganda, and data mining, to use Internet platforms to attract students, and have tried in vain to mislead students' ideology, control students' values, and shake students' faith." Su Ming, Director of Shanghai's Education Commission, believes that in order to ensure that Marxism plays the leading role in universities' ideological arena, we must get a hold over how expression is regulated, and do everything feasible to strengthening leadership over online public opinion. 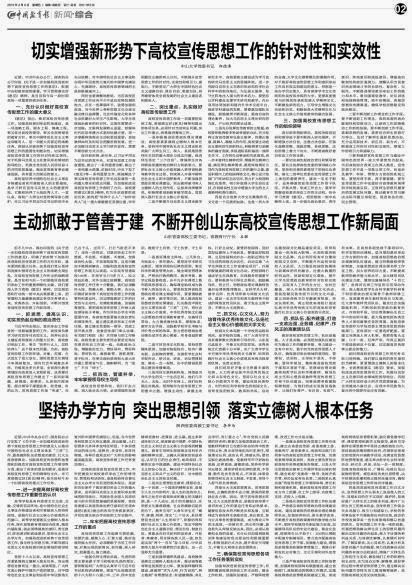 Enforce the principle of freedom in academic research and discipline in classroom lectures, formulate measures to control the classroom that are based on scientific principles, establish classroom control systems, strictly implement oversight and inspection of teacher hiring and teaching assessment and processes. Under no circumstances permit the spread of incorrect ideological viewpoints in the classroom, and ensure that classroom are fertile soil for the impartation of knowledge.
. . . .
Insist up on the principle that the Party controls the media, increase controls over campus newspapers an periodicals, radio and television, and publications. Implement comprehensive control systems for academic speeches, seminars, lectures, and forums, implement systems so every meeting gets reported, and under no circumstances give incorrect ideological viewpoints any channel for transmission.

We must redouble our efforts when it comes to political ideology, and make it explicit to teachers their  responsibility and a duty when it comes to cultivating an ideology, that they are duty-bound to bear a responsibility to history, and to increase conformity of ideology, politics, and sentiment. We must strive to consolidate bottom-line-thinking, and enable teachers to steadfastly hold up the bottom the political, legal, and moral bottom lines. Enforce the principle of freedom in academic research and discipline in classroom lectures. Do not transmit or spread any viewpoints that illegal or harmful, do not defame or smear the Party's leaders or the socialist system, and do not vent your personal negative feelings of resentment.

Implement comprehensive control systems for the battlefield of ideological propaganda. Implement systems so that every academic speech, seminar, lecture, and forum, gets reported. Increase controls over university newspapers and periodicals, radio stations, television stations, and publications. Regulate how all kinds of university organizations are managed. Under no circumstances provide the slightest opening for incorrect ideological trends and viewpoints, and ensure that the battlefield of university ideological propaganda is orderly and healthy.

Recently, Yuan Guiren, the Minister of Eduction, became a hot topic when his speech about the "introduction of Western teaching materials" made the news. This incident cannot help but lead one to ponder.
. . . .
Yuan Guiren pointed out some problems with the teaching materials used in universities and their teaching environment. He established certain fundamental principles and bottom lines with respect to the introduction of Western teaching materials, and called for a boycott of "incorrect Western value systems." He did not, however, completely repudiate, much less "shut down," anything. In this respect, it is completely twisting Yuan's fundamental meaning for some people to interpret what he said as a "complete repudiation" or a return to a "closed door policy."
. . . .
When it comes to academic issues, we fully support "Let a hundred flowers bloom, let a hundred schools of thought contend," and unequivocally stand up for no restrictions on research on, and discussion of, academic issues. But when it comes to political theory propaganda, including the Party's general and specific policies, then it is also necessary to talk about orientation and self-discipline. This is the primary substance of ideology propaganda work. Universities are important battlegrounds in the ideological arena, and if you don't take the initiative to capture the territory, then other people will capture it. If progressive culture does not capture the territory, then it will be captured by incorrect and backwards things. Western values are a multi-faceted and complicated thing, with much that runs contrary to humanity's civilized and mainstream values. What is so wrong with blocking the spread of the West's incorrect viewpoints?