On February 14, 2015, Ren Zhiqiang (任志强) published a post on his Caijing blog entitled "What Are Western Value Systems" (什么是西方价值观). Some excerpts:


If our own value systems are superior to Western value systems, if China wishes to see the world accept China's value system, then why can't the two value systems be allowed to openly compete on the same platform? Why is it necessary to fear Western value systems?
. . . .
Marxism was not invented in China. The October Revolution led by Lenin was once the model for China's revolutionaries, but it did not originate in China. The war against Japan was one part of a global movement to oppose fascism, making no distinctions between East and West. Many of the laws and regulations enacted after reform and opening up began benefited from learning from other countries and the West. Accepting capital from East and West, commercial trading with East and West, these actions that were unacceptable during the Cultural Revolution era.

These screenshots show that the blog was originally available here - http://blog.caijing.com.cn/expert_article-40-79668.shtml - but was subsequently deleted. 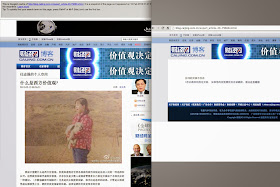 On February 15, 2015, the websites of several mainland China news outlets published an article entitled "Ren Zhiqiang: Our Government Basically Does Not Care About Protecting Private Property" (任志强：我们的政府根本就不想保护私有财产). Some excerpts:


GDP is falling. Why is it some are some investments moving abroad? Besides us, are others also investing abroad? So what are the reasons underlying falling private investment? Perhaps the main reasons are that the government has no credibility, violates its contracts, and appropriates private property.

In addition, the government puts excessive emphasis on the gun and the knife and opposes Western value systems. The winds of the Cultural Revolution are picking up again. Furthermore, when it comes protecting private property, they talk about rule of law, when in fact the rule of law they emphasize is the power of government.

These screenshots show that the article was deleted from the websites of Phoenix and China Economic Net. 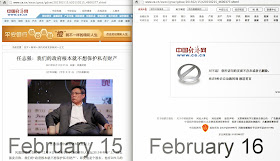 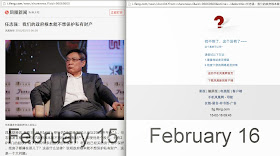