On February 14, 2016, Hu Xijin (胡锡进), Editor-In-Chief of the state sponsored Global Times, posted the following from an iPhone 6 Plus to his Sina Weibo account:


China still needs more open channels for airing views, and should encourage and tolerate constructive criticism, and should have a certain accommodation for non-constructive criticism. Allowing more airing of views will result in certain problems, but it will bring with it even more benefits. The history of modern China proves there is an intimate and inseparable relationship between tolerating the airing of views and the vitality of society, and the State is entirely capable of addressing the problems that it brings about. One hopes that government agencies and officials and all levels and all places will be able to make their own contributions to achieving a broader airing of views.


Editor Hu, you've been drinking some kind of tonic to get your blood up, haven't you

Another year has passed, so has becoming one year older made you wiser?!

Tolerate airing views, restrict dissemination. You can't have both.

This deserves some praise

Even the New Year's Gala can't be discussed, much less anything else.

Editor Hu is saying something sensible, so give him some credit

Speaking frankly, Old Hu's got guts, no matter what Internet users say, he never takes things personally, doesn't retaliate, sling mud, etc. Of course, the comments on Old Hu's posts are mostly random and heated, but can't people just acknowldge something good? Of course where individual views are different its hard to avoid conflict, but its a skill to get people to understand, and the more things are in conflict the more we should avoid locking horns, no?

And what about the New Years Gala?

This is not the first time Hu has discussed the State's attitude toward critical speech.


I met an old friend, very wealthy, opened his own medium-sized company. The kind of guy who will spend 20, 30 thousand on a vacation to Hainan, but who has nothing but complaints about the country. I asked him why, and he said the most important reasons were unhappiness, air, and food safety, no right to speak, not to mention the country's politics.
遇一老友，很有钱，自己开个不大不小的公司，去海南度个假花二三十万的人，但对国家一肚子牢骚。问他为什么，他说不痛快，空气，食品安全，最重要的，没有话语权，对国家政治说不上话。

In December 2014, the Global Times published an article in which it said "Chinese journalists do not enjoy free speech as their Western counterparts do."
Share

All news media run by the Party must work to speak for the Party's will and its propositions and protect the Party's authority and unity, Xi said.

That same day, Wu Qing (吴庆), whose Baidu Baike entry says is a commentator for CCTV-2, posted the following images on his verified Sina Weibo account.

The images show Xi Jinping standing in front a message board that says: “CCTV Party Kinship, Our Absolute Loyalty, Please Inspect Us” (央视姓党，绝对忠诚，请您检阅).


The Party regulates the media. The Party-ruled and State-owned media must follow the Party line.
. . . .
[S]ticking to Party principles sets a high bar. It requires absolute loyalty, responsibility and professional qualifications.
. . . .
[W]e should not view the Party's principles as censorship of media reports but as guidance and encouragement of creativity.

These screenshots were taken on February 22, and show that Baidu was censoring “CCTV Party Kinship,” (央视姓党) but not “CCTV” (央视) and not “Party Kinship” (姓党). 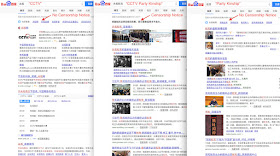 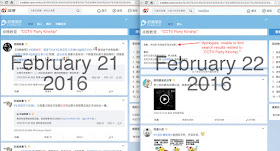 
The China Securities Regulatory Commission (CSRC) has called on Reuters to make a correction following its report claiming that CSRC Chairman Xiao Gang had offered to resign, saying the Reuters report was "inconsistent with the facts."
. . . .
Reuters on Monday quoted anonymous sources as saying that Xiao had offered to resign after "perceived mismanagement wiped more than $5 trillion off the value of the Shanghai and Shenzhen stock markets since they peaked last June."

At 10:41 am on February 20, 2016, the Global Times published an article entitled “Liu Shiyu Replaces Xiao Gang as Head of China's Securities Watchdog.” Some excerpts:


China's State Council has decided to replace Xiao Gang with Liu Shiyu as the new chairman of the China Securities Regulatory Commission, the Xinhua News Agency reported on Saturday.

The same day the Global Times published an editorial entitled “New CSRC Chief Must Provide Stock Market with a Sound Direction.” Some excerpts:


Speculation that Xiao would leave the post has been circulated online for months. Reuters even reported Xiao’s resignation last month, but the news was denied. Amid the steep plunge in the stock market, voices requesting Xiao’s removal were frequently heard in the Internet.

Authorities gave no detailed explanation regarding Xiao being removed. Public opinion cannot define the nature of Xiao’s dismissal immediately, for example, whether he is held accountable or change to another post, or is it because of age limit.

These screenshots show that on the evening July 6, 2015, Baidu began censoring search results for “Xiao Gang Step Down” (肖钢 下台). 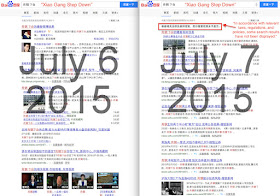 These screenshots show that, within hours of the Global Times publishing the announcement that Xiao Gang would be removed, Baidu stopped censoring search results for “Xiao Gang” (肖钢). One obvious impact was that Sina Weibo results began appearing on the first page of Baidu’s search results. 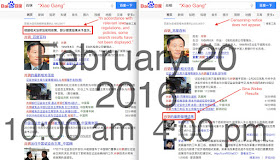 These screenshots show that at 10:00 am a search on Baidu for “Xiao Gang Step Down” restricted to web pages on the Sina blogging domain returned no results. The same search a few hours later returned pages of results.

On January 7, 2016, China’s official news agency Xinhua reported that the Xinjiang branch of the Cyber Administration of China shut down a public Wechat (Weixin 微信) account for six days because of what it termed a “malicious headline.”

According to the report, the offending headline read “Major Accident Outside of Urumqi - 22 Dead, 5 Wounded” (乌市南郊出大事了——２２死５伤).

The actual content of the article was “A major traffic accident occurred outside of Urumqi, 22 sheep were killed and 5 sheep were injured” (乌市南郊发生交通事故，致２２只羊死亡，５只羊受伤).

According to the government, this discrepancy was a violation of the “Interim Rules on the Development and Administration of Instant Messaging Tools and Public Information Services” (即时通信工具公众信息服务发展管理暂行规定).

Misreporting traffic accident fatalities is a jailable offense in China. For example, according to a report in the state sponsored Southern Metropolis Daily, in August 2013, the Wudangshan public security bureau subjected a Mr. Xue to five days administrative detention because he had published posts with "rumors," claiming seven people had died in a car accident, when in fact only three people had died.
Share
‹
›
Home
View web version